Client Brief:
To replace our old leaking shower cubicle that had been patched up so many times and still leaks.
Dabney Solution:
Firstly, to identify where the leaks were coming from!

After a thorough investigation and even after cutting a hole in the downstairs kitchen ceiling to gain access to hidden pipework, it was determined that the existing shower cubicle had numerous leaks from various places. It was concluded that it was beyond repair. So on instruction from the client and after providing an informative quote for the job, we were given the go ahead to completely change the existing shower cubicle to a new one.

The necessary products were sourced after careful dimensions were taken, on arrival of the products the work could commence. A 4-yard was required and placed on the clients driveway. The old existing shower cubicle was carefully removed along with the shower tray and the walls tiles. The property was of Victorian origin so the walls and plaster were originally built in Lath and plaster.

It was decided to completely remove the lath and plaster walls from the shower wet area and take it back to the bare timber stud walls and start again. Full access was required to access the plumbing services so alterations could be made. Supplies were isolated at a supply pump in the loft. Carpentry alterations were carried out so a decent fixing for the new thermostatic shower could be attached too.

Supplies reinstated and all pipework heat and pressure tested. New timber stud work and noggings added to walls to form a solid structure ready to carry new moisture proof plasterboard. The new 12mm moisture proof plasterboard had to be doubled up in thickness to suit the remainder of the room and gain the correct depth to provide a perfect finish. The new curved concrete resin 800mm x 900mm shower tray was fitted to a custom built solid timber plinth to provide the correct waste water fall to an existing drain.

The existing wall tiles had been discontinued. The client decided to go for a contrast tile that was cut down and chamfered to the correct size so the existing tile pattern could be followed. Tiling and grouting completed to the walls. Floor tiles and upstand plinth to shower tray tiled to suit a curved fascia and curved tray. 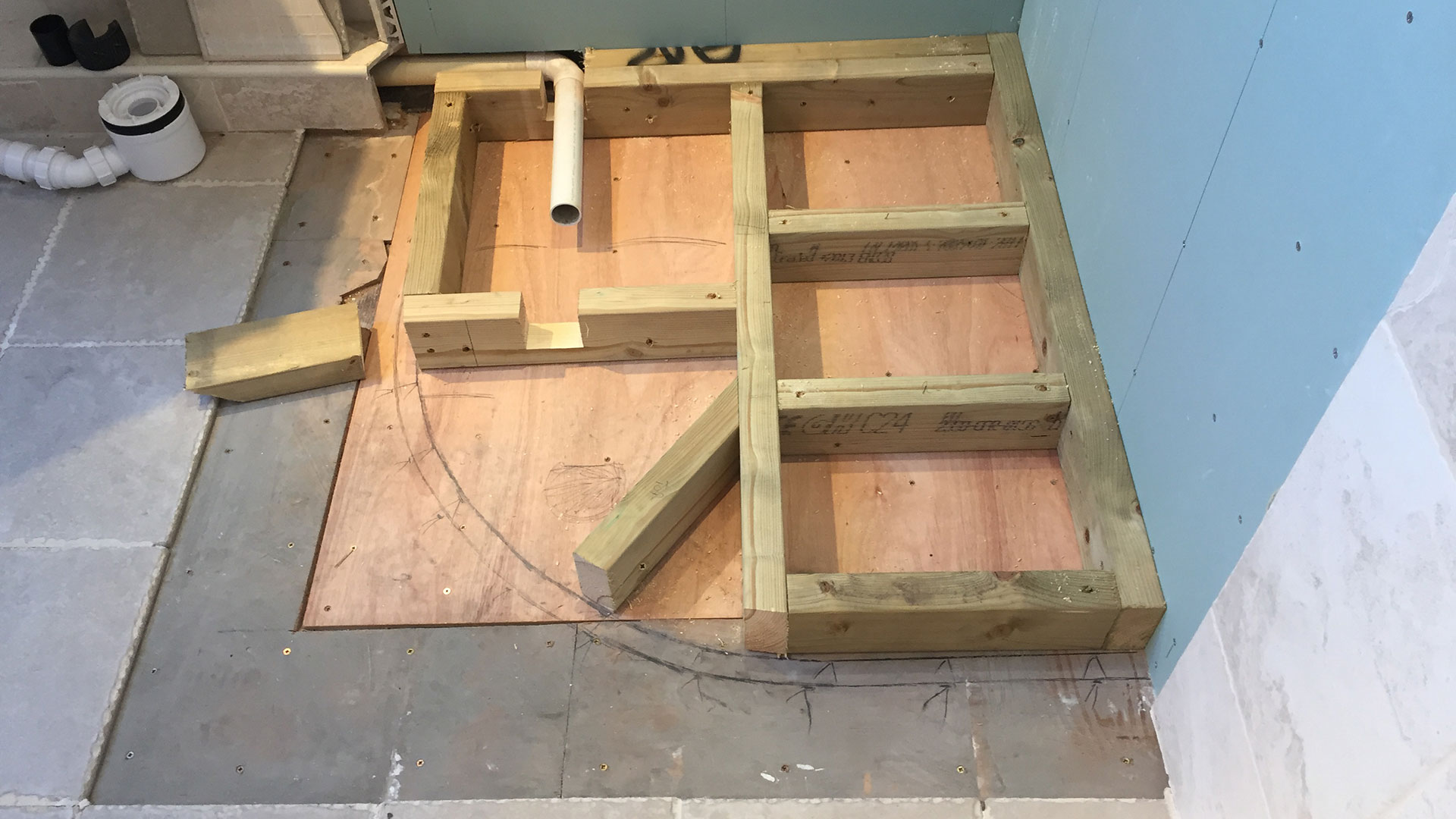 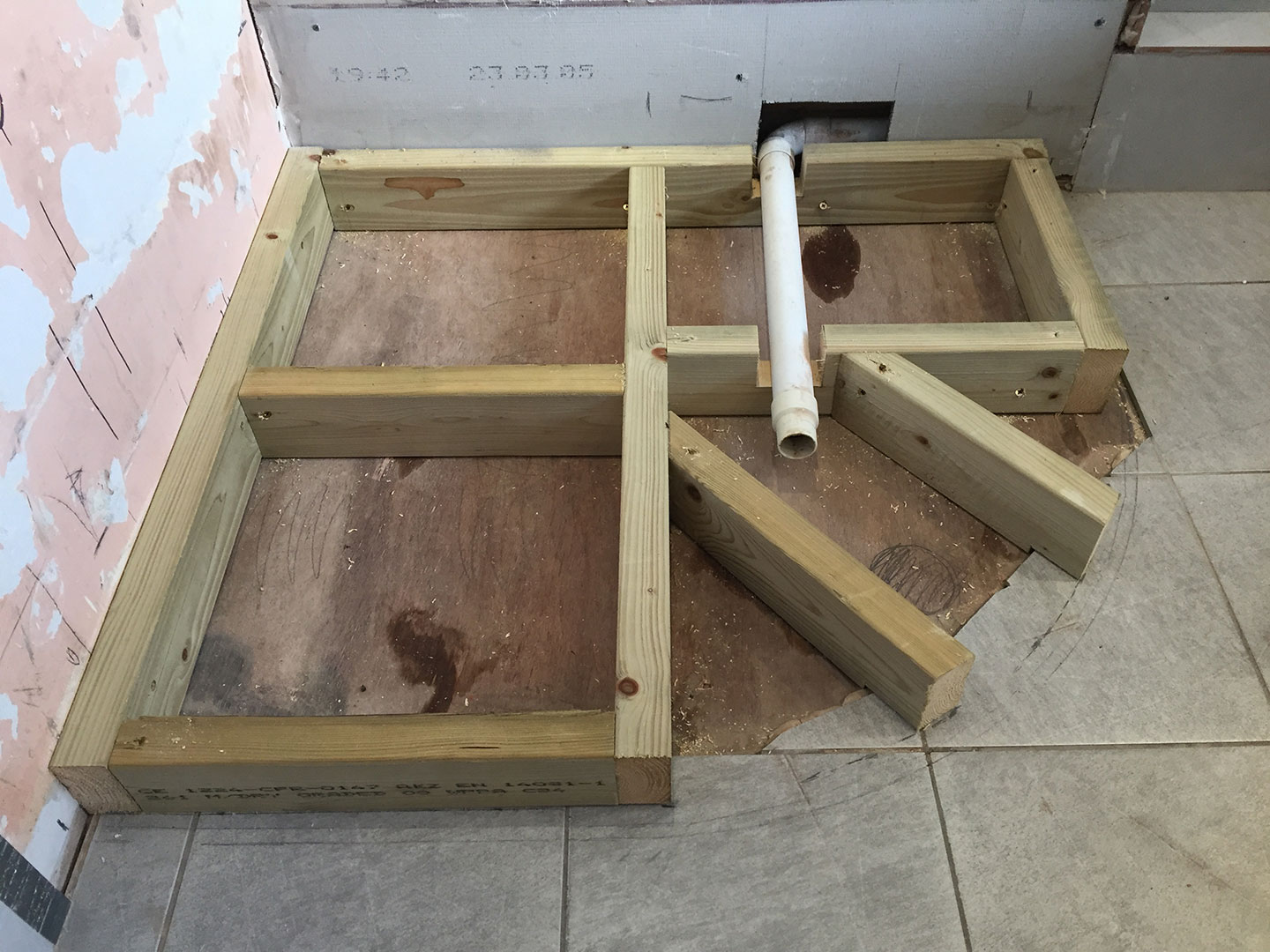 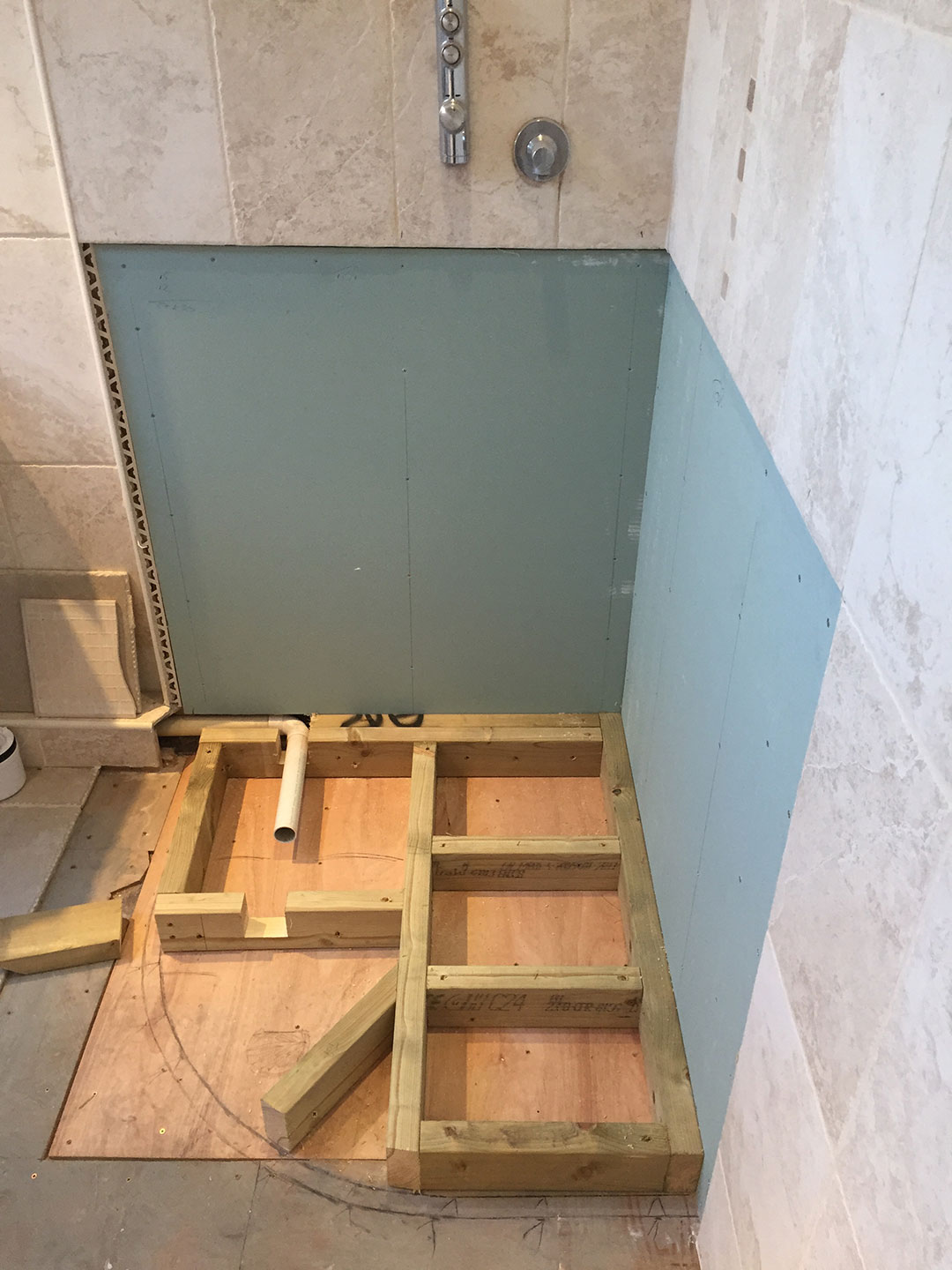 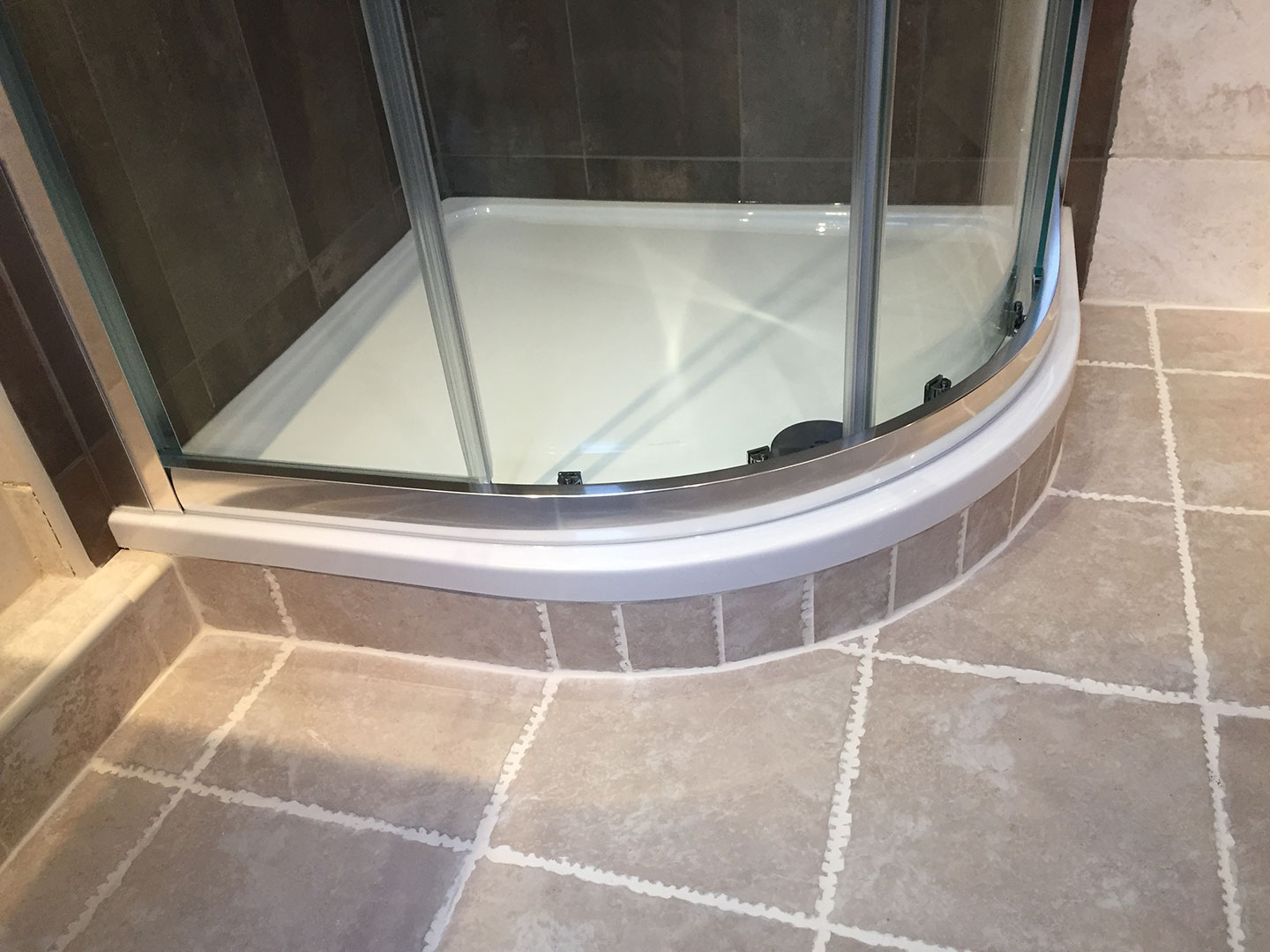 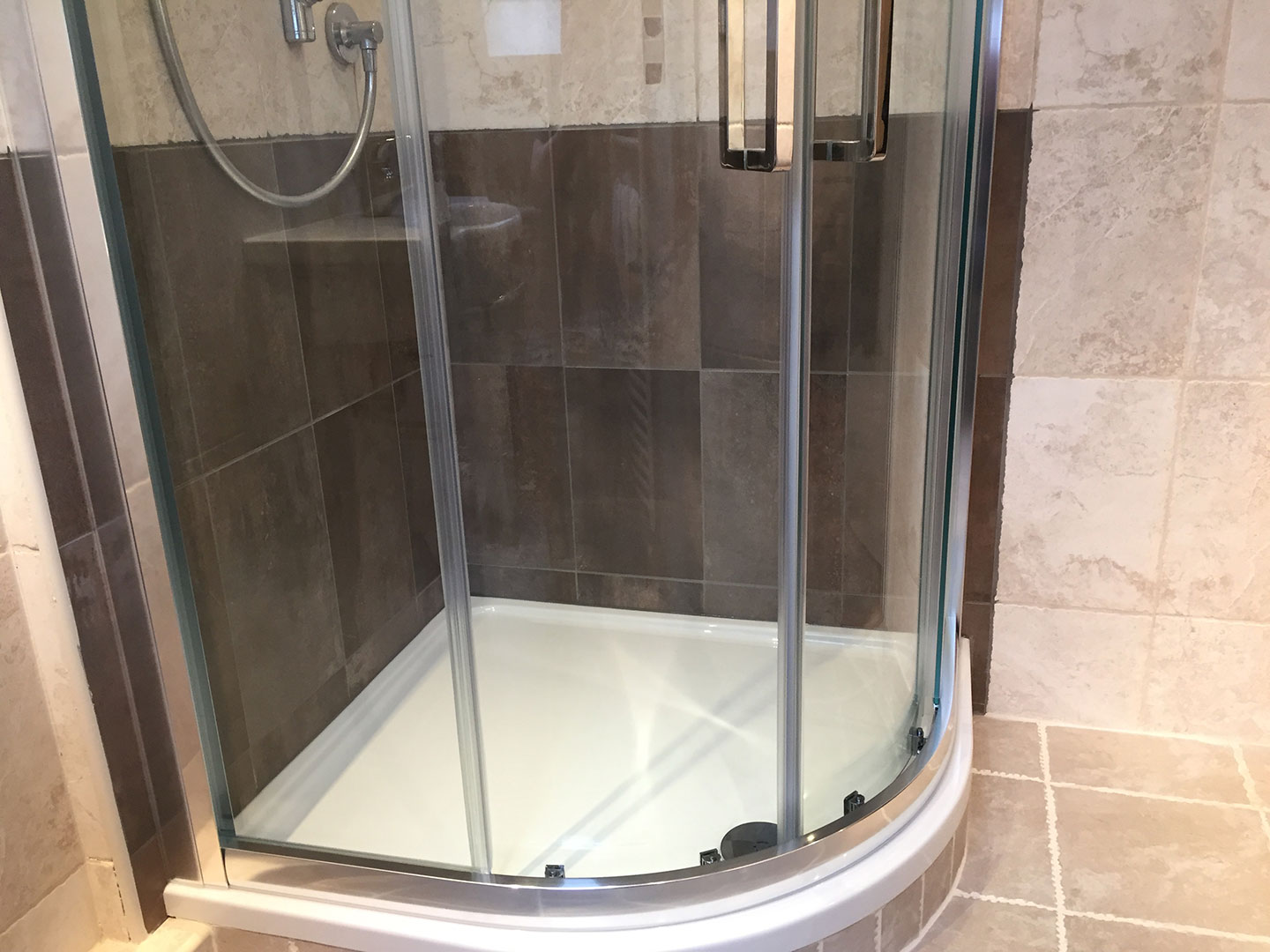 Clive was a pleasure to have around. Our job required far more than just a plumber, he had to remove part of the walls to take out the tiles, put up new plasterboard then retile the walls and the floor where it was needed. He made an excellent job of it. He turned up when he said he would and always explained what he was doing.
Happy Client